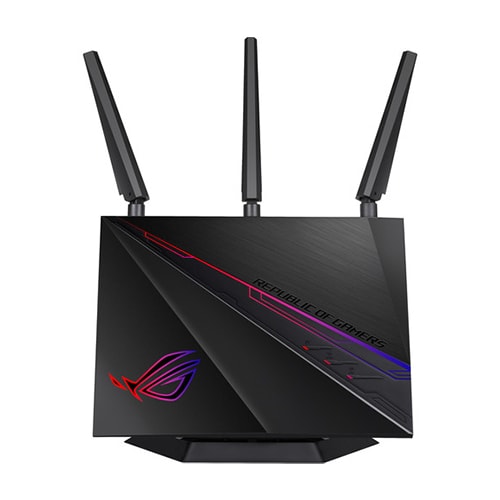 The ROG Rapture GT-AC2900 Wireless Dual-Band Gigabit Gaming Router from ASUS. If you're a gamer and demand the lowest pings and latency to get an edge, then the Rapture can help with triple-level game acceleration. The GT-AC2900 also supports the future of gaming by being NVIDIA-certified as a GeForce NOW device. GeForce NOW is NVIDIA's cloud-based game streaming platform for Windows-based PCs, Macs, and Shields.

The dual-band Wi-Fi 5 (802.11ac) Rapture is also engineered to increase the Wi-Fi coverage in your home. Supporting ASUS's AiMesh technology, you can set it up as your main router and utilize older AiMesh-compatible routers as Wi-Fi nodes around the home. The Rapture offers significant coverage on its own with three external antennas and dual-band MU-MIMO support. You can utilize 3x3 MU-MIMO at 2.4 GHz to optimize range, or go 4x4 MU-MIMO to maximize speed and accommodate an extra connected device.

The Rapture offers many other features to help maximize your speed and overall internet experience, such as gigabit link aggregation, dual-WAN support, beamforming, easy NAT setup, AiProtection Pro network security, parental controls, and more. To top it off, the Republic of Gaming Rapture GT-AC2900 lets you show your style with RGB lighting and effects.